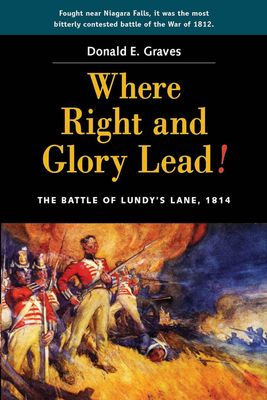 Where Right and Glory Lead!

This is the story of one of the most hard-fought actions in North American history. On a summer evening in July 1814, within sight of Niagara Falls, American, British and Canadian soldiers struggled desperately in a close-range battle that raged on into the dark. By morning more than a third had become casualties. The two armies had fought to the point of exhaustion, and who won has long been a matter of dispute.

Lundy’s Lane was the bloodiest battle of the War of 1812 and the bloodiest fought on what is now Canadian soil. It was the high mark of the 1814 Niagara campaign, which was the longest of the war and the last time Canada suffered a major foreign invasion.

In his analysis of this still-controversial battle, Donald E. Graves narrates the background and events in detail while providing a thorough examination of the weapons, tactics and personalities of the opposing armies. The result is possibly the most complete analysis of a musket-period action to appear in print.

Praise For Where Right and Glory Lead! : The Battle of Lundy's Lane, 1814…

“Fair treatment of both sides in the Lundy’s Lane encounter … should earn this book a ‘definitive’ treatment for years to come.” — David Skaggs, Journal of the Early Republic

“Brilliant and exciting and sometimes surprising interpretation of the greatest battle ever to have taken place on Canadian soil.” — Michael Power, Brock Review