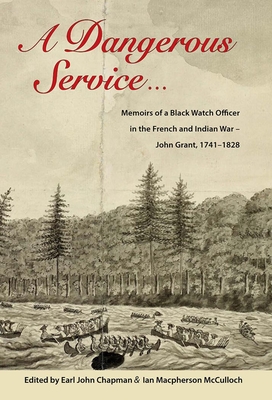 John Grant’s eyewitness accounts and anecdotes about military life on campaign and in garrison during the French and Indian War provide a fascinating and invaluable portrait of the soldier’s life. Through his memoirs and the well-researched text of Chapman and McCulloch, we follow the young Scot from his childhood in the turbulent Scotland of the Jacobite uprisings to his service in the British army’s senior Highland regiment, the Black Watch, in the Americas during Britain’s “Great War for Empire.” He saw action in the West Indies, the siege of Havana and the capture of Montreal and spent much of his time in the American colonies, at New York, Staten Island and on the frontier routes to the north by way of the Hudson River, Albany, Ticonderoga and Oswego. This is an important addition to the literature of the period by two respected experts.


Praise For A Dangerous Service …: Memoirs of a Black Watch Officer in the French and Indian War – John Grant, 1741–1828…

“Here is something fresh and original – a rare, authentic ‘voice’ of a soldier from the mid-eighteenth century. It offers unique personal insights reflecting the reality of campaign life and combat, both often recalled with a certain self-­deprecating humour. Starting with his earliest, fragmented memories of a childhood disrupted by the Jacobite rebellion of the ’45, Grant recounts his service as a subaltern in the 2nd Battalion of the 42nd Foot, the famous Royal Highland Regiment or ‘Black Watch,’ from his first taste of action at Guadeloupe in 1759 to the siege of Havana in 1762.” — Dr. ­Stephen Brumwell, award-winning historian and author of George Washington: Gentleman Warrior and Redcoats

“Students of the French and Indian War will find much of interest in Lieutenant Grant’s previously unpublished account of his service with the Black Watch in the West Indian and North American theatres; and, by turns, will be fascinated, enlightened and finally charmed by Chapman and McCulloch’s thoroughly researched biography of the officer-memoirist.” — Dr. John A. Houlding, author of Fit for Service: The Training of the British Army 1715-1795

Earl John Chapman, a native of Montreal, is a military historian specializing in the Seven Years’ War in North America and in the early years of Canada’s volunteer militia force. He is a member of the History and Heritage Committee of Canada’s Black Watch, the country’s senior Highland regiment, and has published numerous articles, many appearing in international journals and magazines, and has written several books, the most recent being A Bard of Wolfe’s Army: James Thompson, Gentleman Volunteer, 1733-1830, which he co-edited with Ian M. McCulloch in 2010. He was the 2008 recipient of the Gordon Atkinson Memorial Prize in Highland Military History, awarded annually by the Quebec Thistle Council.

Ian Macpherson McCulloch is a military historian, the former Deputy Director of History & Heritage for the Canadian Forces in Ottawa. He currently serves on the Directing Staff of the Canadian Forces Joint Command & Staff College. He has published numerous articles in international journals, magazines and anthologies. He has written or edited several books, including a comprehensive two volume history, Sons of the Mountains: The Highland Regiments in the French & Indian War, 1756–67, chronicling the service of the three Highland regiments that fought in North America during the Seven Years’ War, and A Bard of Wolfe’s Army: James Thompson, Gentleman Volunteer, 1733-1830, which he co-edited with Earl Chapman (2010).

Stephen Brumwell is the author of Redcoats: The British Soldier and War in the Americas, 1755-1763.