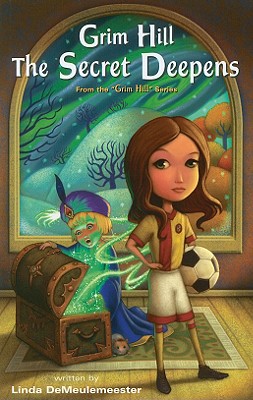 "After a soul-shaking Halloween, things have finally gotten back to normal for Cat Peters. Now the big drama in her life isn't a battle against diabolical fairies, but a battle of the sexes on the soccer field. Meanwhile, ever since escaping her imprisonment in Grim Hill, Cat's little sister Sookie has only been interested in one thing: magic.
When Sookie discovers an old trunk and experiments with it, a doorway opens to dark and magical world n the realm of Father Winter. Unknowingly Sookie has tapped into the same evil magic she experienced in Grim Hill. Father Winter finds a way to manipulate her, and soon an innocent trick she performs at the school's talent show gives the dark fairy lord the means to maintain his kingdom. After Sookie's amazing performance, in which she makes children disappear in the magic trunk and then reappear a moment later, children start getting sick, and a paralyzing winter hits the town. What no one realizes is that the children return not as they were, but as enchanted pieces of oak n fairy changelings
Has Father Winter found a way to keep an icy grip on Cat's friends and family forever? What has happened to the children that Sookie made vanish? The mystery leads Cat back to the dreaded Grim Hill. With the help of her rival from the boy's soccer team, she confronts the the powerful beings that dwell there and agrees to a contest that could save their town. But even if they win, can they trust the conniving fairies to let them to go home?"