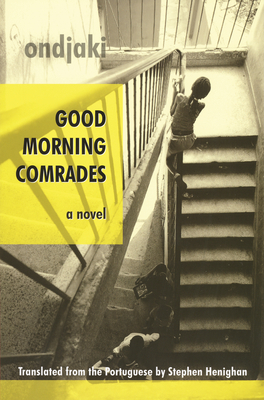 Luanda, Angola, 1990. Ndalu is a normal twelve-year old boy in an extraordinary time and place. Like his friends, he enjoys laughing at his teachers, avoiding homework and telling tall tales. But Ndalu's teachers are Cuban, his homework assignments include writing essays on the role of the workers and peasants, and the tall tales he and his friends tell are about a criminal gang called Empty Crate which specializes in attacking schools. Ndalu is mystified by the family servant, Comrade Antonio, who thinks that Angola worked better when it was a colony of Portugal, and by his Aunt Dada, who lives in Portugal and doesn't know what a ration card is. In a charming voice that is completely original, Good Morning Comrades tells the story of a group of friends who create a perfect childhood in a revolutionary socialist country fighting a bitter war. But the world is changing around these children, and like all childhood's Ndalu's cannot last. An internationally acclaimed novel, already published in half a dozen countries, Good Morning Comrades is an unforgettable work of fiction by one of Africa's most exciting young writers.

Ondjaki: Ondjaki was born in Angola in 1977. He studied sociology in Lisbon and attended film school in New York. He is the author of three novels and three short story collections, in addition to two collections of poems and a book for children. Ondjaki's novels and stories have been translated into English, French, Spanish, German and Italian. His novel The Whistler appeared in English from Aflame Books in the U.K. He lives in Luanda and has made a documentary film about his native city.Stephen Henighan: Stephen Henighan's books include Lost Province: Adventures in a Moldovan Family, A Grave in the Air, The Streets of Winter and A Report on the Afterlife of Culture. A nominee for the Governor General of Canada's Literary Award, he teaches at the University of Guelph, Ontario.
Loading...
or
Not Currently Available for Direct Purchase