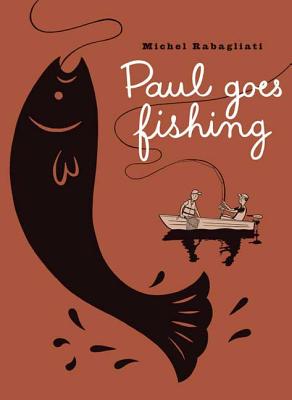 This fourth installment in Michel Rabagliati's semiautobiographical series finds Paul settling comfortably into adult life, occasional twinges of anxiety aside. His graphic design business has taken off, his partner, Lucie, is pregnant, it's mid-July and time to leave behind the city to go fishing. Long lazy days stretch out while Paul's thoughts wander from the colorful characters at the fish-and-game camp to the
lurking depths of childhood, a Holden Caulfield–esque adolescence, and the encounters that have shaped his sense of family thus far. But the golden glow soon lifts off his vacation with the realization that the lake isn't as idyllic as it would seem, and neither is pregnancy.

Elegant composition and spare, condensed drawing crystallize emotion and atmosphere in this wistful and engaging account of
everyday hopes and hardships, told with a keen and playful sense of iconic detail. Even the mundane holds beauty and meaning in this compassionate story of expectation, disappointment, and wonder.

Michel Rabagliati is the cartoonist behind Paul in the Country (2000), Paul Has a Summer Job (2003), and Paul Moves Out (2005), which garnered
Canada's Doug Wright Award for Best Book of the Year.