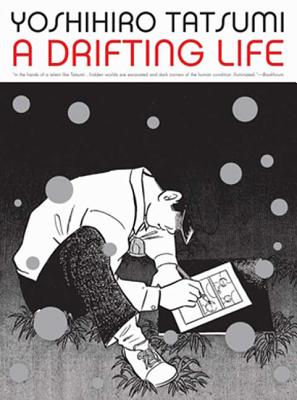 The epic autobiography of a manga master

Acclaimed for his visionary short-story collections The Push Man and Other Stories, Abandon the Old in Tokyo, and Good-Bye—originally created nearly forty years ago, but just as resonant now as ever—the legendary Japanese cartoonist Yoshihiro Tatsumi has come to be recognized in North America as a precursor of today's graphic novel movement. A Drifting Life is his monumental memoir eleven years in the making, beginning with his experiences as a child in Osaka, growing up as part of a country burdened by the shadows of World War II.

Spanning fifteen years from August 1945 to June 1960, Tatsumi's stand-in protagonist, Hiroshi, faces his father's financial burdens and his parents' failing marriage, his jealous brother's deteriorating health, and the innumerable pitfalls that await him in the competitive manga market of mid-twentieth-century Japan. He dreams of following in the considerable footsteps of his idol, the manga artist Osamu Tezuka (Astro Boy, Apollo's Song, Ode to Kirihito, Buddha)—with whom Tatsumi eventually became a peer and, at times, a stylistic rival. As with his short-story collection, A Drifting Life is designed by Adrian Tomine.


Praise For A Drifting Life…

“In the hands of a talent like Tatsumi . . . hidden worlds are excavated and dark corners of the human condition illuminated.” —Bookforum on Yoshihiro Tatsumi

“His nakedly personal work, created when the medium was predominantly impersonal, made Tatsumi unique in Japan and around the world.” —Print on Yoshihiro Tatsumi

Born in Osaka, Japan, in 1935, Yoshihiro Tatsumi began writing and drawing comics for a sophisticated adult readership in a realistic style he called “Gekiga.” He is the cartoonist of The Push Man and Other Stories and Abandon the Old in Tokyo.

Adrian Tomine is the author of Scenes from an Impending Marriage, Shortcomings, Summer Blonde, Sleepwalk, 32 Stories, and the comic book series Optic Nerve. He is also an illustrator for The New Yorker, Esquire, and Rolling Stone, and his stories have appeared in The Best American Nonrequired Reading and An Anthology of Graphic Fiction, Cartoons, and True Stories. A graduate of the University of California at Berkeley, Tomine lives in Brooklyn, New York.
Loading...
or
Not Currently Available for Direct Purchase