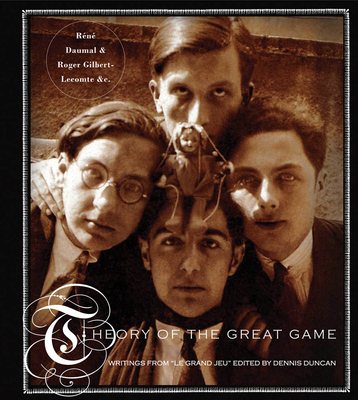 Theory of the Great Game

This book collects the writings of a radical group of writers close to Paris Surrealism--principally Ren Daumal and Roger Gilbert-Lecomte--as published in their now legendary magazine, Le Grand Jeu (The Great Game). Le Grand Jeu ran to three issues between 1928 and 1930, before collapsing due to its editors' infighting, drug use and vehemently unreasonable aspirations for both art and life. The Grand Jeu is often associated with Surrealism (they were invited to join the group), but their ideas were far more extreme. The magazine was the public face of a group of artists and writers who systematically attacked their perceptions of reality through narcotics, anaesthesia and near-death experiences.
Le Grand Jeu describes a politico-mystical outlook which combined a critique of the apathy and repression of contemporary Western society with a quest to take leave of the individual ego and to reconnect with a collective Universal Mind. The group's esoteric program united narcotic and parapsychological practices with asceticism, revolutionary politics (the Russian Revolution was barely a decade old) and a prophetic mode of poetry which they identified in antecedents such as Rimbaud and Mallarm . In this definitive collection, the theories of the Grand Jeu are presented in the group's own words for the first time, through the essays and articles which formed the bulk of their magazine.