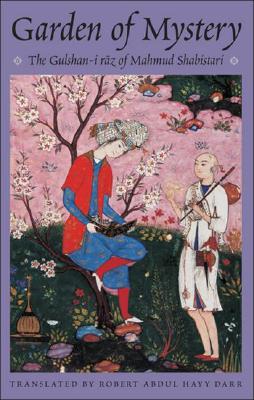 Garden of Mystery, the 'Gulshan-i Raz', holds a unique position in Persian Sufi literature. It is a compact and concise exploration of the doctrines of Sufism at the peak of their development that has remained a primary text of Sufism throughout the world from Turkey to India. It comprises a thousand lines of inspired poetry taking the form of answers to questions put by a fellow mystic. It provides a coherent literary bridge between the Persian 'school of love' poetry and the rapidly growing number of metaphysical and gnostic compositions from what had come to be known as the school of the 'Unity of Being'. Translated by Robert Darr who has for thirty-five years been a student of classical Islamic culture.

Mahmud Shabistari (d.1339), was born near Tabriz around 1288 in the golden age of Sufism. He was a follower of the teachings of Ibn Arabi and Attar (Rumi's literary and spiritual predecessor). He was a well known Sufi who lived in times of great turmoil following the Mongol invasions.

Robert Abdul Hayy Darr (b. 1951 in California) has, for nearly forty years, been a student of Islamic culture. He has studied Persian and Afghan literature and history, Afghan and north Indian music, and classical Afghan miniature painting. His translation of Mahmud Shabistari’s masterpiece, Gulshan-i raz, published by Archetype in 2007 as Garden of Mystery, has been acclaimed as a new classic.