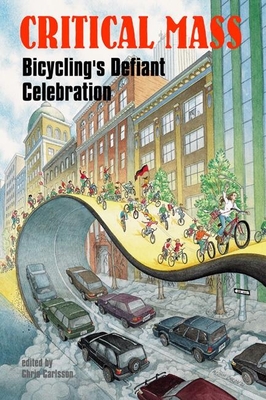 Monthly in cities around the world, bicyclists take over the streets in an "organized coincidence" called Critical Mass. Riding along several hundred strong, hooting and hollering, whistling, laughing and singing; it is a coup on wheels, a clever tactical strike against our oil-dependent culture. Containing writings from participants worldwide, this colorful book bundles together 10 years of legendary debates, photographs, artwork, and life-transforming experiences evolving from the celebratory, visionary revolt on bicycles called Critical Mass.

Chris Carlsson is a founder and editor of the notorious underground magazine, Processed World, and the director of the historical multimedia project, Shaping San Francisco. He was recently awarded the Golden Wheel Award by the San Francisco Bike Coalition for founding Critical Mass in 1992.

Chris Carlsson, executive director of the multimedia history project Shaping San Francisco, is a writer, publisher, editor, and community organizer. He has edited four collections of political and historical essays. His most recent book is After The Deluge, a utopian novel of post-economic San Francisco. He was long-time editor of Processed World magazine.
Loading...
or support indie stores by buying on