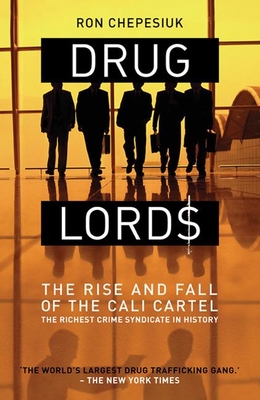 The Rise and Fall of the Cali Cartel

For 20 years, the Cali drug cartel, a vast criminal conspiracy, pumped thousands of tons of cocaine into the United States, laundered billions of dollars in profits and was responsible for endemic political corruption and an untold number of murders and assassinations. It ultimately controlled 70 percent of the world's cocaine market, flooding towns and cities with the addictive white powder dubbed the "champagne of drugs."

Through organized violence, terrorist strategies, intimidation and bribery, the cartel became a major threat to Colombia's fragile stability. It also brought an unprecedented degree of strategy and planning to the drugs trade. It would take more than two decades and a global effort to bring it down.

In this first-ever account of the cartel's rise and fall, author Ron Chepesiuk provides a compelling insight into the history of international drug trafficking, organized crime and US drug policy. He draws vivid pictures of the gang's founders--Jose "the Chess Player" Londono and brothers Miguel and Gilberto Rodriguez Orejuela--and reveals how they built their empire, carving up the massive US market with their rival Medellin Cartel: New York going to Cali, Miami to Medellin.

Unlike Medellin, headed by the vicious Pablo Escobar, the men from Cali kept their complex operation in the shadows. It grew quickly and came to operate like a multinational corporation. In time, they became too big to share their spoils and fought an indescribably bloody war with the Medellin mob, a war they ultimately won.

Written with the pace and vividness of a thriller, Drug Lords also illustrates the similarities between global traffickers and international terrorists and compares the current war on terror with the war on drugs.

Ron Chepesiuk is the author of 18 books, including Hard Target: The US's War with International Drug Trafficking, 1982-1997 and War on Drugs: An International Encyclopedia. He is a Fulbright Scholar and teached writing in the journalism program for UCLA's Extension Division.
Loading...
or
Not Currently Available for Direct Purchase