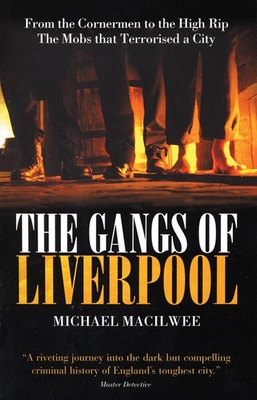 The Gangs of Liverpool

Victorian Liverpool was a city of abundant wealth and abysmal poverty. By day the broad streets bustled with wealthy merchants making fortunes from the booming dock trade. By nightfall they were taken over by fearsome gangs from the foul courtyards and overcrowded tenements. Shrieks and screams cut the air, while brawls and brutal muggings were commonplace.

The Gangs of Liverpool is a fascinating tour through a long-forgotten netherworld where armed ruffians fought for territory or pride and no man was safe after dark. From warring Catholic and Protestant mobs of the 1850s with names like the Hibernians and the Dead Rabbits emerged the Cornermen, whose wicked exploits made them feared throughout the city.

Previously hidden in the shadows of their inner-city slums, the gangs now took center stage. Most notorious of all were the High Rip, who announced themselves with the infamous Blackstone Street Murder and launched a vicious war against their sworn enemies, the Logwood Gang.

Author Dr. Michael Macilwee has conducted exhaustive research to portray the Victorian underworld in one of its most colorful periods, replete with Dickensian cutthroats, iron-hard detectives, pitched battles, and draconian punishments.

From religious riots to bare-knuckle brawls, The Gangs of Liverpool is a riveting journey into the dark but compelling criminal history of England's toughest city.

Dr. Michael Macilwee has worked as a librarian in the Liverpool John Moores University library for eighteen years and has contributed to numerous academic journals. The Gangs of Liverpool is his first book.

Michael Macilwee is 46 and has lived in Liverpool, England all his life. He has worked as a librarian in the Liverpool John Moore's University library for 18 years and has contributed to numerous academic journals. He has an MA in Victorian Literature and a PhD in American Literature. The Gangs of Liverpool is his first book.
Loading...
or
Not Currently Available for Direct Purchase