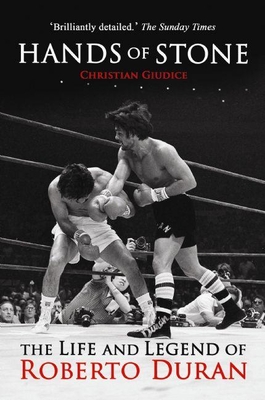 A riveting read from the first page to the last.--The Ring

A compelling book; at times it's a profoundly detailed reconstruction of Duran's world.--Gerald Early, Belles-Lettres

Now the subject of a major motion picture, Roberto Duran is a sporting legend. Often called the greatest boxer of all time, he held world titles at four different weights and is the only man in history to have fought in five different decades. His bouts with fellow greats like Sugar Ray Leonard, Thomas Hit Man Hearns, and Marvin Hagler have gone down in fistic folklore. When he finally retired, in January of 2002 at the age of fifty-two, his a professional record stood at a remarkable 104 wins (69 by KO) in 120 fights. They called him Manos de Piedra: "Hands of Stone."

Journalist Christian Giudice's definitive, critically-acclaimed biography tells the no-holds-barred of Duran's incredible life, both in and out of the ring. Giudice interviewed the fighter, his family, his closest friends and scores of his opponents to separate truth from myth and fact from fable.

Duran was born in utter poverty in Panama and grew up in the streets, fighting to survive. His talent with his fists soon emerged, and he had his first professional fight in 1967. He grew into a fighter's fighter, renowned for his speed, stamina, toughness and skill, but above all for his unquenchable thirst for battle. His hunger to destroy opponents and his willingness to take on anyone, anywhere, made him a huge fan favorite, while his flamboyant lifestyle outside the ring made worldwide headline news.

Duran was one of the first Latino fighters to become a mainstream sports star in the United States, and his natural talent, unprecedented achievements, and longevity have left an indelible mark on the world of sport. His life is now the subject a major film starring Edgar Ramirez as the boxer, Robert De Niro as his famed trainer, Ray Arcel, and Usher as Ray Leonard.

Christian Giudice is a freelance journalist based in New Jersey. He is also the author of The Rise and Fall of Alexis Arguello and A Fire Burns Within: The Miraculous Journey of Wilfredo Gomez.

Christian lives in Haddonfield, NJ. He is a freelance sportswriter who has contributed pieces to Boxing Digest, Fightnews.com, The Jerusalem Post, the Gloucester County Times and various other publications. He graduated from Temple with an MA in Journalism. This is his first book.
Loading...
or support indie stores by buying on