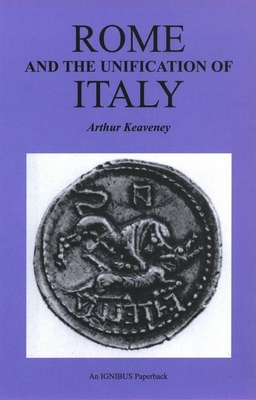 Rome And The Unification Of Italy (Ignibus Paperbacks)

Scarcely more than a generation before Octavian (later Augustus) set out to encounter Antony and Cleopatra at the battle of Actium, confidently relying on the firm support of 'all Italy', the Italians were in revolt, with the avowed aim of destroying Rome. The impressive unity displayed in 31 BC was the hard-won product of fifty years of earlier struggle; and that struggle forms the subject of this book.  From the second century BC the subject peoples of Italy were motivated by a desire for equality with their powerful sister, Rome. Their reasons were diverse, but once their aspirations intruded on Rome's private life, they were to have a profound effect on her politics. At first it was hoped that equality could be achieved through citizenship but, when the Romans proved obdurate, the Italians sought complete independence.  Detailed reconstruction of the consequent 'Social War' is the central feature of the book. The war ended with Rome granting its citizenship to the Italians, though that grant was so hedged about with qualifications that further interventions proved necessary - these on so marked a scale that by the end of the 80s BC Italy and Rome had basically achieved the unity which Octavian was later able to exploit. Arthur Keaveney seeks here to delineate the factors which led to the Italian desire first for citizenship, then for independence; he describes the conflict and he assesses its outcomes. He maintains that Rome's 'Italian question' has to be treated as an essentially political issue.

Dr Arthur Keaveney is Reader in Ancient History at the University of Kent. He specialises in Greek and Roman History as well as neo-Latin, and has a keen interest in the Eastern Empires and especially the Persians.
Loading...
or
Not Currently Available for Direct Purchase