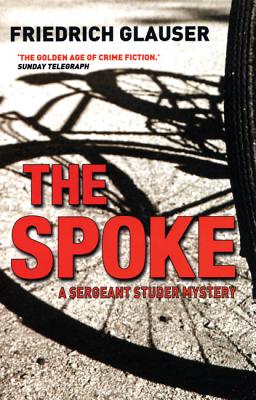 "Fever is a deviously plotted procedural. Not many can outdo Friedrich Glauser."--The New York Times

"This gem contains echoes of D rrenmatt, Fritz Lang's film M and Thomas Mann's The Magic Mountain. Both a compelling mystery and an illuminating finely wrought mainstream novel, Matto's Realm will make it clear to American readers why the German language prize for detective fiction is named after Glauser."--Publishers Weekly

"Thumbprint is a fine example of the craft of detective writing in a period which fans will regard as the golden age of crime fiction."--The Sunday Telegraph

This is the fifth, and last, novel in the much-acclaimed Sergeant Studer series. Why must the festive dinner in the Hirschen Inn be interrupted? A murder puts an end to the wedding celebration of Studer's daughter. A man is found with a sharpened bicycle spoke embedded in his back, and a suspect is quickly arrested--a bit too quickly, thinks Studer. Property speculation, usury, and betrayed love find their way into this tightly written mystery novel that calls on Studer's intuitive, often absurd, yet efficient police methods.

The Spoke, a European crime classic, was first published in 1937. It has been translated into six languages. This is its first publication in English.

Friedrich Glauser is a legendary figure in European crime writing. He was a morphine and opium addict much of his life and began writing crime novels while he was an inmate at the Swiss insane asylum Waldau.

Diagnosed a schizophrenic, addicted to morphine and opium, Glauser spent the greater part of his life in psychiatric wards, insane asylums and prison. His Sergeant Studer novels have ensured his place as a cult figure in Europe. Mike Mitchell has translated some thirty books and won the Schlegel-Tieck German translation prize.
or
Not Currently Available for Direct Purchase
Copyright © 2020 American Booksellers Association