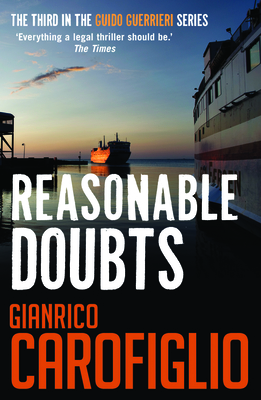 The role of Guido Guerrieri is to take on impossible cases that have little chance of success. The lawyer accepts the case only because he's fallen in lust with the prisoner's wife; his efforts to prove his client's innocence bring him into dangerous conflict with Mafia interests. Everything a legal thriller should be.--The Times

Counsel for the defense Guido Guerrieri is asked to handle the appeal of Fabio Paolicelli, who has been sentenced to sixteen years for drug smuggling. The odds are stacked against the accused: not only the fact that he initially confessed to the crime but also his past as a neo-Fascist thug. It is only the intervention of Paolicelli's beautiful half-Japanese wife that finally overcomes Guerrieri's reluctance. Matters are further complicated when Guerrieri ends up in bed with her.

This book is hard-boiled and sun-dried in equal parts. Where Philip Marlowe would be knocking back bourbon and listening to the snap of fist on jaw, Guerrieri prefers Sicilian wine and Leonard Cohen. The local color is complemented by snappy legal procedural writing which sends the reader tumbling through the clockwork of a tightly wound plot.

Gianrico Carofiglio, a member of the Senate in Italy, was an anti-Mafia prosecutor in Bari, a port on the coast of Puglia. He has been involved with trials concerning corruption, organized crime, and human trafficking. He has written four Guido Guerrieri novels, all bestsellers, having sold over a million copies worldwide.

New and returning readers who enjoy an intelligent, thoughtful, and dedicated lawyer hero or a moderately paced legal thriller are sure to savor the latest entry in the Guerrieri series.” Booklist

"The legal thriller aspects are fascinating and cleverly devised, but that takes a back seat to the deep look at the ethics of the middle age attorney Guido. Readers will appreciate his realizations and rationalizations as he ponders between the best and worst defenses. Few sub-genre tales contain a better protagonist as he makes the tale worth reading with his fresh somewhat cynical spin.” MBR Book Watch

The role of the Bari-based lawyer Guido Guerrieri is to take on impossible cases that have little chance of success. In Reasonable Doubts, by Gianrico Carofiglio, translated by Howard Curtis, his client is appealing against his conviction and lengthy sentence for drug smuggling; he’s also a former neo-fascist thug who had once beaten up Guerrieri. The lawyer accepts the case only because he’s fallen in lust with the prisoner’s wife; his efforts to prove his client’s innocence bring him into dangerous conflict with Mafia interests. Everything a legal thriller should be.” The Times