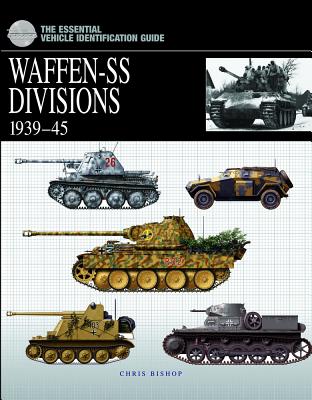 Illustrated with detailed artworks of vehicles and their markings, Waffen-SS Divisions: 1939–45 is the definitive study of the equipment and organization of Germany’s elite Waffen-SS divisions during World War II. Organized chronologically by division and formation date, the book describes in depth the various models of tank and other armored and soft vehicles in service with the ‘fighting’ SS, with listings of unit commanders, vehicle types and numbers, and unit structure. Each divisional section is further broken down by campaign, accompanied by orders of battle, a brief divisional history of the campaign, and any specific unit markings. Every SS division that saw combat is featured, from well-known units such as the elite Das Reich and Wiking divisions, to lesser-known divisions, such as the 11th Waffen-SS Panzer Division Nordland and the Albanian-recruited 21st Waffen-SS Gebirgs-Division Skanderbeg. With information boxes accompanying the full-color artworks, all drawn to the same scale for easy comparison, Waffen-SS Divisions: 1939–45 is a key reference guide for modelers and military history enthusiasts with an interest in the Waffen-SS divisions of World War II.