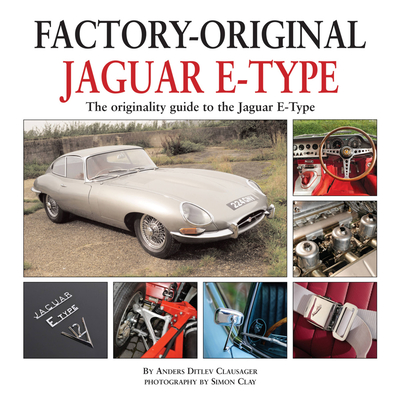 The Originality Guide to the Jaguar E-Type Mk2 (Factory-Original)

This book covers production versions of Jaguar's legendary E-type, from the 3.8 of 1961 to the last of the V12s of 1975.   Model-by-model, with hundreds of pictures, it gives you all the details of correct factory specifications and equipment, including body panels, external trim and badging, paint colors, interior trim and trim colors, dashboard, instruments and switches, under-hood components, engine and transmission, lamps, and all other features right down to the tool kit, from the beginning of production to the end. All this detailed information is vital to the buyer, owner and restorer.   Each model's section opens with a brief text introduction followed by specially commissioned color photographs with extended captions. For quick reference to accurate and comprehensive information, this formula is hard to beat.

Anders Ditlev Clausager was born in Denmark in 1949. He came to London in 1974 to study automotive design at the Royal College of Art and obtained his master’s degree in 1976. He spent a brief period with Volkswagen, where he designed the second-generation Polo, but came back to England in 1978, working for British Leyland at Longbridge. In 1979, he became archivist to BL Heritage, subsequently the British Motor Industry Heritage Trust, and in 2000 moved to the Jaguar Daimler Heritage Trust where he was chief archivist until 2012. In 2000 he completed a master’s degree in history at the University of Warwick. He has written or co-authored 20 books on a variety of mostly British cars, including Austin, Austin-Healey, Jaguar, MG, Mini, and Sunbeam-Talbot, but also Porsche and Volvo. He was one of four authors of the award-winning Britain’s Motor Industry The First Hundred Years. He has contributed to various magazines, and to The Guardian. Anders is well known as a motoring historian. He was a founder member of the Classic Vehicle Clubs’ Committee, which later became the Federation of British Historic Vehicle Clubs, and for several years served on the dating committee of the Veteran Car Club. Since 2009 he has been Secretary of the Society of Automotive Historians in Britain, while he is also a trustee of the Michael Sedgwick Memorial Trust, and a member of the Advisory Council of the National Motor Museum at Beaulieu. He has twice received the Bradley Distinguished Service Award from the American Society of Automotive Historians. He maintains an active interest in many aspects of motoring history and is usually busy with one or more projects. He lives in Birmingham with his husband David and has only recently and reluctantly given up riding a BMW after 40 years as a motorcyclist.