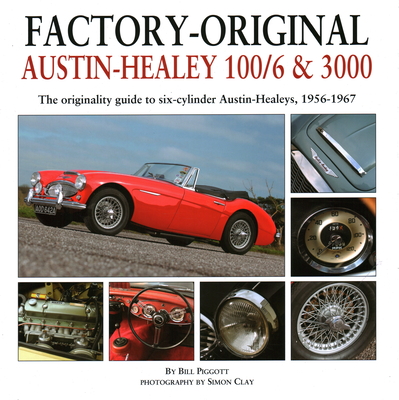 The originality guide to six-cylinder Austin-Healeys, 1956-1968

The four-cylinder Austin-Healey 100 sports car had already made a big name for itself by the time the 2.6-litre six-cylinder 100/6 arrived in 1956. This came as a 2+2 seater, joined in 1958 by a two-seat version, and both were replaced by the more powerful 3000 model in 1959, again offered as a two-seater or 2+2, and available with disc brakes. The Mk II 3000, launched in 1961, could be had either as the limited-production 132bhp two-seater with triple carburettors and side screens, or as the less spartan 2+2 convertible with wind-up windows, and the final version was the 2+2-only1964 Mk III, now with 150bhp, a wooden dash and better appointments. All these "Big Healeys" are as much admired today as when they were new, and here marque expert Bill Piggott gives full details of correct specification and equipment for all these cars, backed up by in-depth colour photography of outstanding examples of all models and variants. Body panels, external trim and badging, paint colours, interior trim, dashboard, instruments and controls, under-bonnet components, engine and transmission, lamps, and other features right down to the tool kit, are all covered.

A lifelong sports car enthusiast, Bill Piggott has served as principal registrar of the TR Register and also as archivist. His access to factory records and archives has provided him with a unique opportunity to thoroughly explore Triumph TRs. Bill practiced for many years as a lawyer, but now devotes most of his time to writing about classic cars and steam railways, as well as finding and renovating interesting vehicles. Since buying his first TR in 1970, he has owned examples of virtually every model.