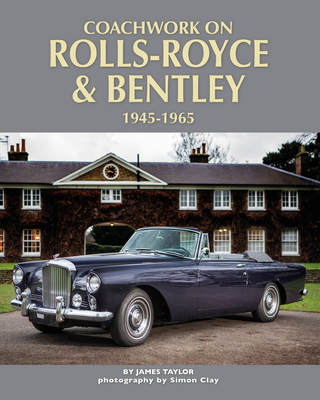 Rolls-Royce and Bentley relied upon standardised body designs after 1945, but for the next two decades both marques also supplied chassis frames separately, and it was possible to have these clothed with coachwork by bespoke coachbuilders like, for example, Mulliner, Park Ward and James Young in Britain, or Graber, Farina and Franay in Europe.

Many buyers took this route, and this highly illustrated book bears witness to the wide variety of styles that were built in this fascinating period. Chassis number lists for each coachbuilder, both in Britain and overseas, identify their creations, to make this a comprehensive and essential companion for anyone interested in Rolls-Royce and Bentley in the postwar era. Coachwork on Rolls-Royce and Bentley, 1945-1965 joins the author’s recent work Coachwork on Derby Bentleys 1933-1940 in our list.


Simon Clay is a freelance photographer specializing in cars, people, and architecture. He trained at Bournemouth & Poole College of Art, and from 1990 to 1996 was employed full-time as the photographer for England's National Motor Museum at Beaulieu.