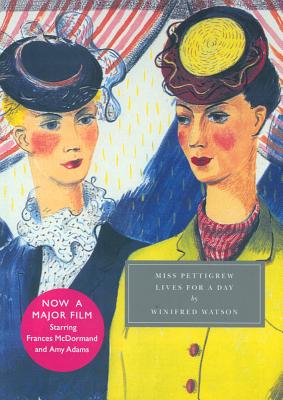 “Why has it taken more than half a century for this wonderful flight of humor to be rediscovered?”—Guardian

“The sweetest grown-up book in the world.”—Sunday Times

“Everyone, no matter how poor or prim or neglected, has a second chance to blossom in the world.”—Daily Mail, in reference to Miss Pettigrew Lives for a Day

A major film released in 2008, Miss Pettigrew Lives for Day is a delightful, funny, lighthearted novel. First published in 1938, it was reissued in the United Kingdom in 2000, complete with thirty-five original illustrations, and has sold over 22,000 copies.

Miss Pettigrew, an approaching-middle-age governess, was accustomed to a household of unruly English children. When her employment agency sends her to the wrong address, her life takes an unexpected turn. The alluring nightclub singer, Delysia LaFosse, becomes her new employer, and Miss Pettigrew encounters a kind of glamour that she had only met before at the movies. Over the course of a single day, both women are changed forever.

Winifred Watson (1907-2002) lived in Newcastle and wrote six novels in all; she chose to stop writing after the birth of her son in 1941. The Times interviewed her at age 94 when Persephone Books reissued the book in 2000. The headline was "Bodice-Ripping Fame at 94."
Loading...
or
Not Currently Available for Direct Purchase