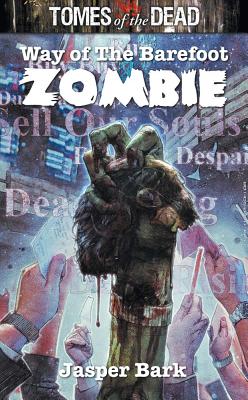 Tomes of the Dead

Way of the Barefoot Zombie

Zombie fiction at its finest. Tomes of The Dead is a collection of some of the very best eyeball popping, gut munching, zombie fiction around, groaning with horror and excitement. Each book will explore the zombie genre in new and thrilling ways. Join us in these worlds of the dead and remember to leave your sanity by the door On a Caribbean island Doc Papa has reinvented the zombie as a role-model for the rich. The elite come to St. Ignatius to study the Way of the Barefoot Zombie and interact with the undead in order to free their own inner zombies. Then nothing will stop them making a killing on the markets. However, Doc Papa's plans go awry when the island is infiltrated by undercover operatives and a rogue priestess.

Jasper Bark writes fiction and comics for grown ups and children. He has written for everyone in British comics, from 2000 AD through to the Beano and Viz. He has published one previous novel A Fistful of Strontium for Black Flame. Prior to this he toured extensively and made numerous radio and TV appearances as a stand up poet. He has also worked as a national film and music journalist and written scripts for short films, radio and stage plays. He has published two books of poetry and was awarded a Fringe First at the Edinburgh Festival in 1999.
Loading...
or
Not Currently Available for Direct Purchase