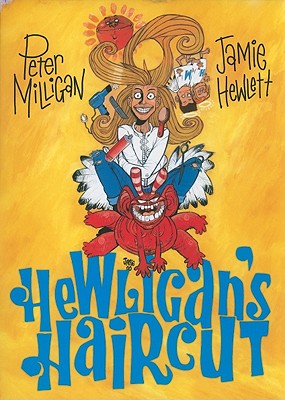 Hilarious re-invention of the comic-strip, a surreal visual feast with an extraordinary sense of design from Hip-Hop cartoon band Gorillaz' co-creator Jamie Hewlett. Hewligan: The last sane man in the asylum. The fate of the planet Earth rests on his scalp. That's because of Hewligan's haircut; the most elegant thatch ever created which happens to contain a magic hole. Together with the reality-warping, Scarlet O'Gasmeter, he is going to save reality and fall in love.

Peter Milligan is one of 2000 AD's most prolific story creators, and has now, of course, graduated to much wider comics fame. As well as co-creating Hewligan's Haircut with Jamie Hewlett, Milligan created the classic future war story Bad Company, in addition to creating Freaks, Shadows, Sooner or Later, The Dead and Tribal Memories. He also contributed several short stories and Future Shocks, and has written Judge Dredd and Rogue Trooper stories. His work outside the Galaxy's Greatest Comic has received enormous critical and fan acclaim; notably Vertigo's existentialist superhero mystery Enigma, via The Eaters Human Target, Girl, Tank Girl: The Odyssey, Al, Animal Man, Batman, Minx, Shade the Changing Man and Skreemer. His most recent works are Marvel's best-selling X-Statix, a vicious pop culture satire, and Vertigo Pop! London, a rock'n' roll tale of the big city, and Greek Street also for Vertigo. Jamie Hewlett is best known for his work on Tank Girl, the hugely popular anarchic British comics heroine whose adventures were turned into a big-budget Hollywood movie in the 1990s. To 2000 AD fans, of course Hewlett is best known for his co-creation of Hewligan's Haircut, but he also provided art for Judge Dredd and Sooner or Later. His most recent artwork is visible in the videos of the band Gorillaz: Hewlwtt designed the cartoon characters that represent the band live, as well as designing the set and costumes for international sensation Monkey, a Chinese opera by Blur and Gorillaz front man Damon Albarn.
Loading...
or support indie stores by buying on