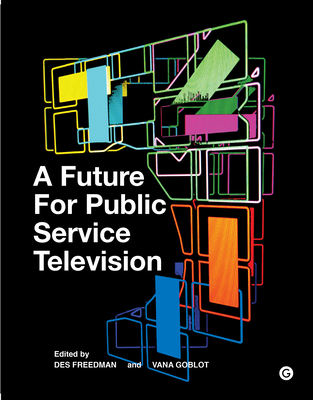 A Future for Public Service Television

A guide to the nature, purpose, and place of public service television within a multi-platform, multichannel ecology.

Television is on the verge of both decline and rebirth. Vast technological change has brought about financial uncertainty as well as new creative possibilities for producers, distributors, and viewers. This volume from Goldsmiths Press examines not only the unexpected resilience of TV as cultural pastime and aesthetic practice but also the prospects for public service television in a digital, multichannel ecology.

The proliferation of platforms from Amazon and Netflix to YouTube and the vlogosphere means intense competition for audiences traditionally dominated by legacy broadcasters. Public service broadcasters--whether the BBC, the German ARD, or the Canadian Broadcasting Corporation--are particularly vulnerable to this volatility. Born in the more stable political and cultural conditions of the twentieth century, they face a range of pressures on their revenue, their remits, and indeed their very futures. This book reflects on the issues raised in Lord Puttnam's 2016 Public Service TV Inquiry Report, with contributions from leading broadcasters, academics, and regulators. With resonance for students, professionals, and consumers with a stake in British media, it serves both as historical record and as a look at the future of television in an on-demand age.

Des Freedman is Professor of Media and Communications at Goldsmiths, University of London. He is project lead for the Inquiry into a Future for Public Service Television. Vana Goblot teaches media and communications at Goldsmiths, University of London, and is a research associate on the Inquiry.. Amanda D. Lotz is Professor of Media Studies at the University of Michigan and a Fellow at the Peabody Media Center. She is the author of The Television Will Be Revolutionized, the coauthor of Understanding Media Industries and Television Studies, and the editor of Beyond Prime Time: Programming in the Post-Network Era.
Loading...
or
Not Currently Available for Direct Purchase