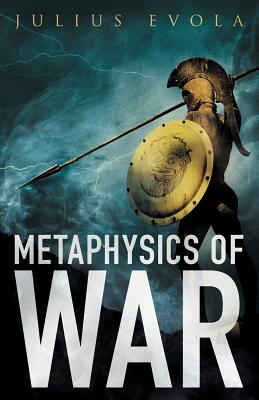 Battle, victory and death in the world of tradition.

These essays, originally written by Evola during the 1930s and '40s, deal with war from a spiritual and heroic perspective. Evola selects specific examples from the Nordic, Vedic, Roman, Persian, Islamic and other traditions to demonstrate how traditionalists can prepare themselves to experience war in a way that will allow them to overcome the limited possibilities offered by our materialistic and degraded age, thereby transcending the Age of Kali and entering the world of heroism by achieving a higher state of consciousness, which Evola depicts as an effective realisation of the ultimate purpose of life.

His call to action, however, is not that of today's armies, which ask nothing more of their soldiers than to become mercenaries in the temporary employ of a decadent class. Still less is it a call to misdirected or nihilistic violence. Rather, Evola presents the warrior as one who lives an integrated and purposeful way of life - one who adopts a specifically Aryan view of the world in which the political aims of a war are not its ultimate justification, but rather war is seen as merely a means through which the warrior finds his calling to a higher and more complete form of existence beyond the political, and in accordance with the teachings of the great spiritual texts. More importantly, he shows how the ideal of the warrior extends beyond the battlefield into other aspects of traditional living, even in times of peace.