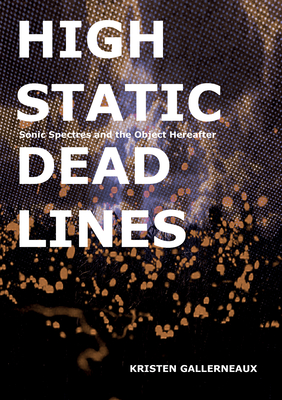 Trees rigged up to the wireless radio heavens. A fax machine used to decode the language of hurricanes. A broadcast ghost that hijacked a television station to terrorize a city. A failed computer factory in the desert with a slap-back echo resounding into ruin.

In High Static, Dead Lines, media historian and artist Kristen Gallerneaux weaves a literary mix tape that explores the entwined boundaries between sound, material culture, landscape, and esoteric belief. Essays and fictocritical interludes are arranged to evoke a network of ley lines for the “sonic spectre” to travel through—a hypothetical presence that manifests itself as an invisible layer of noise alongside the conventional histories of technological artifacts.

The objects and stories within span from the mid-nineteenth century to the present day, touching upon military, communications, and cultural history. A connective thread is the recurring presence of sound—audible, self-generative, and remembered—charting the contentious sonic histories of paranormal culture.

High Static, Dead Lines is one of the most imaginative books to contend with sound in recent memory.
—4columns

Gallerneaux reminds us that it's ok to be irrational when confronted with new technologies. She doesn't seem to pass any judgement whatsoever on the appeal that the supernatural might have on perfectly balanced minds. We might look with amusement at the historical examples of human gullibility described in the book but I doubt we are much wiser today.
—We Make Money Not Art

An enthralling look at how sound waves have contributed to what we think of as paranormal culture.
—Chicago Review of Books

Because of its historical, curatorial, and cultural curiosity, High Static, Dead Lines: Sonic Specters and the Object Hereafter is an interesting and insightful read for media historians, parapsychologists, sound artists, and anyone interested in technological materiality.
—LEONARDO

This book is brilliantly providing a path to experience, walking on the blurry line among sounds, machines and human perceptions.
—Neural

Kristen Gallerneaux is a writer, folklorist, and artist. She has published on topics as diverse as mathematics in midcentury design, the visual history of telepathy research, the world's first mouse pad, and car audio bass battles in Miami. She is also Curator of Communications and Information Technology at the Henry Ford Museum in Dearborn, Michigan, where she continues to build upon one of the largest historic technology collections in North America.
Loading...
or
Not Currently Available for Direct Purchase