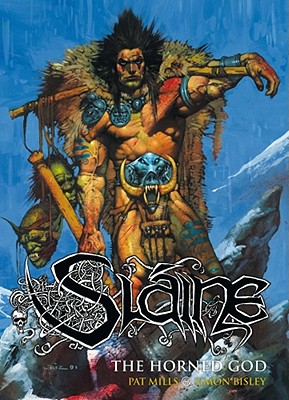 Celtic warrior Slaine faces his greatest adventure. He must overcome the Formian Sea-Demons that threaten the Earth goddess and the very existence of the land of Tir Nan Og. Fully-painted color art from Judgement on Gotham/Teenage Mutant Ninja Turtles artist Simon Bisley.

The warrior barbarian Slaine, master of the warp spasm, wielder of the mighty axe Brainbiter, Celtic warrior king - faces his greatest challenge: the existence of his world is at stake as he prepares to follow the ways of the Horned God. It is a path that can give him control over nature itself or unleash a new age of witchcraft and dark forces.
A premium hardcover editon of the classic book.

Pat Mills’ writing and editorial career started in Dundee, working for D.C. Thomson on the teenage romance magazine Romeo. Later Mills went freelance and started a long relationship with IPC Magazines, initially writing for girl’s titles like Tammy, Pink and Sandy. He was an assistant editor on Tammy, the publication which began the comic revolution. Then, with Malcolm Shaw, he did some preliminary work devising Jinty before moving over to rejuvenate boy’s comics. He created Battle (with John Wagner), Action, Misty and 2000 AD (featuring Judge Dredd). Other notable works include Marshal Law, Third World War in Crisis, the title series for Doctor Who Weekly and Requiem Vampire Knight. He has also recently written several books including Be Pure! Be Vigilant! Behave!, a history of 2000 AD and Serial Killer with artist Kevin O’ Neill, a darkly comedic thriller.
Loading...
or
Not Currently Available for Direct Purchase