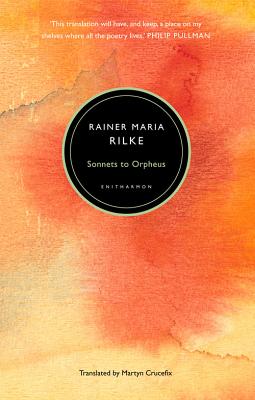 In 55 sonnets Rainer Maria Rilke plays an astonishing set of philosophical and sensual variations on the Orpheus myth. ‘Praising, that’s it!’ he declares; nature, art, love, time, childhood, technology, poverty, justice – all are encompassed in poems that spark with insight and invention, among the most joyful and light-footed that Rilke ever wrote. Translated by Martyn Crucefix.

Rainer Maria Rilke (1875-1926) was born in Prague and led a nomadic existence, living in Germany, Russia, Spain, Italy and France before his death in Switzerland from leukaemia. He dedicated himself exclusively to his work, including the New Poems (1907-8), the semi-autobiographical novel The Notebooks of Malte Laurids Brigge (1910) and Sonnets to Orpheus (1923). The Duino Elegies (1923) is acknowledged as his masterpiece. Martyn Crucefix has won numerous prizes including a major Eric Gregory award and a Hawthornden Fellowship. He has published five collections, and his translation of Rilke s Duino Elegies, published by Enitharmon in 2006, was shortlisted for the Cornelius M Popescu Prize for European Poetry Translation and hailed as unlikely to be bettered for very many years (Magma)."
Loading...
or
Not Currently Available for Direct Purchase