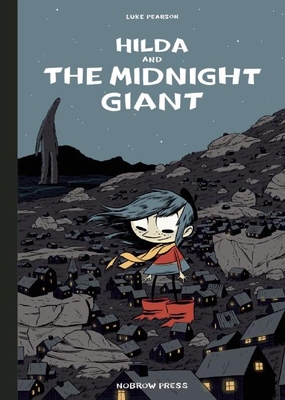 In Hilda and the Midnight Giant, our protagonist finds her world turned upside down as she faces the prospect of leaving her snow-capped birthplace for the hum of the megalopolis, where her mother (an architect) has been offered a prestigious job. During Hilda's daily one-and-a-half hour trek to school she looks for ways to stall her mother's decision. She conspires with the beings of the mystical Blue Forest to delay the inevitable. Will they help or hinder her? More importantly, who is this mysterious Midnight Giant?

Luke Pearson, author of Hildafolk , Hilda and the Midnight Giant, and Everything We Miss has fast become one of the leading talents of the UK comics scene, garnering rave reviews from the prestigious Times Literary Supplement and The Forbidden Planet International Blog amongst others. He was the winner of Young People's Comic category at the British Comic Award in 2012 and been nominated for the Eisner Award's Best Publication for Kids and Best Writer/Artist in 2013. He has recently worked as a storyboard artist on the cult classic show Adventure Time. Luke is a frequent contributor to a number of comic anthologies in the UK as well as self-publishing a number of small-run homemade comics.

Hilda is coming to Netflix in 2018!
A Publisher’s Weekly Top Illustrated Book, 2012

"Pearson’s utter lack of pretension keeps Hilda feeling fresh, while his reading of folktales and Tove Jansson’s Moomin series embeds Hilda in the long history of children’s stories. […] Hilda’s dilemmas, while fantastic, also feel real […] Pearson has found a lovely new way to dramatize childhood demons, while also making you long for your own cruise down the fjords."
—The New Yorker

"[Hilda’s world] is… a glorious, exciting if also rather menacing place — one children will be eager to enter. It’s also visually arresting: exuberant and lively and faintly Miyazakian"
—The New York Times Book Review

"Hilda is the little girl. And this is her folk tale. And pretty much everything you need to know about how good this is is there on that absolutely gorgeously delightful cover. By the end of it, you’ll have exactly the same smile as Hilda has."
—Forbidden Planet

"For adults ... Pearson’s measured storytelling ... and detailed, imaginative artwork make Hilda and the Bird Parade an absolute treat to dive into. It’s hard to imagine a better all-ages comic will be published this year."
—Slate

"very enjoyable, it's imaginative and fun for kids and adults too!"
—Renata Liewska, author of bestselling The Quiet Book

"If you know a young comics reader, or a a child that you’d like to turn into a comics reader – especially if they love fairy-tale-like stories – this would be a great place to start them. Hilda isn’t a superhero, but she sure saves the day."
—Erica Friedman for Okazu

"Pearson’s whimsical artwork—a cross between Lucky Luke and Miyazaki—creates a magical spell of a mysterious world of hidden creatures, and the production of the book make it a treasure in itself. The story—comparable to the Adventures of Polo series by Regis Faller and Copper by Kazu Kibuishi—never flags in imagination or wonder"
—Publisher’s Weekly, Starred Review

"I think I loved this one even more than the first."
—Changing Hands

"If you haven't heard of Luke Pearson, buddy, you have been hiding under a particularly uninteresting rock this past year."
—The Comics Bureau

"If what you’re looking for is great storytelling, humour, adventure and imagination then what are you waiting for? Come on in, the water’s fine."
—The Illustrated Forest

"Midnight Giant is sad, but packs probably the most weighty punch of the series as far as real-life lessons for kids. […] It’s less a moral about transitioning from childhood to adulthood than it is about a transition from the naiveté of early childhood (Santa Claus, anyone?) into the more realistic stages of later childhood. It’s also about what matters most — possessions or people?"
—Comics Alliance

"Pearson's latest comic, the spell-binding contemporary fairytale Hildafolk, feels just as at home in publisher Nobrow Press' visually intelligent catalogue as it does between good old fashioned yarns like Bone and The Adventures of Tintin in my bookcase."
—Avoid the Future
or
Not Currently Available for Direct Purchase
Copyright © 2020 American Booksellers Association