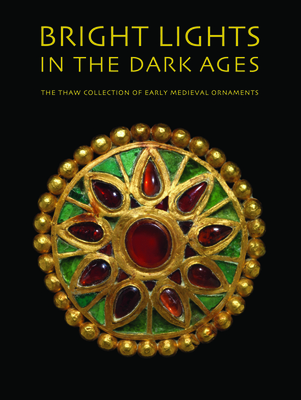 Bright Lights in the Dark Ages

Bright Lights of the Dark Ages is a major new volume on early Medieval art. It features over two hundred stunning and extremely rare early medieval gold and precious stonework objects, including brooches, buckles, shields, clasps, spoons and other "grave goods", that were interred as status symbols with their owners in burials mounds across Europe.

The new societies of the early Medieval period which developed on the periphery of the great Roman Empire - Germanic barbarians in western Europe, Sarmatian and later Alanic tribes around the Black Sea, and the eastern frontier cities bordering the Parthian Empire in Iran - were all shaped by interaction with the Roman Empire, and profoundly influenced by its material culture. Author No l Adams surveys the magnificent pieces that were made to advertise power and wealth in these new "barbarian" kingdoms which arose after the fall of the Roman Empire, and in doing so shows the dramatic and surprising relationship
between these "migration era" objects and later medieval art. In a volume full of wonderful images, highlights include Gothic and Visigothic imperial style brooches from modern-day Slovakia and Crimea, superb Gallo-Roman spoons and enamelled domed brooches and buckles from Northern Europe and Britain.