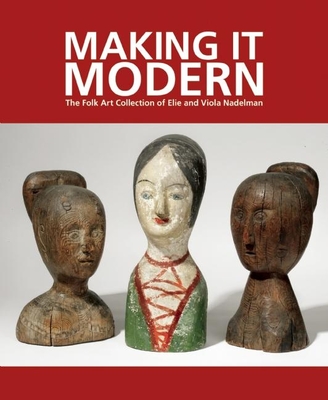 The Folk Art Collection of Elie and Viola Nadelman

This lavishly illustrated volume is the first comprehensive study of the folk art collection purchased by the New-York Historical Society from Elie and Viola Nadelman in 1937. Exhibited by the couple from 1926 to 1937 in their pioneering Museum of Folk and Peasant Arts in Riverdale, New York, the nearly fifteen thousand works come from a collection spanning six centuries, thirteen countries, and a broad range of media. Authors Margaret K. Hofer and Roberta J.M. Olson explore a nucleus of some two hundred and sixteen highlights in eighty-seven catalog entries, as well as nine of Nadelman's own sculptures, and consider the possible interchanges between the Nadelman's collecting and his avant-garde art. Their research, employing new archival evidence from the Historical Society and the rich cache of Nadelman Papers, has resulted in exciting discoveries, among them Nadelman's active role in restoring some of his folk art objects.

Featuring seven provocative essays, Making It Modern breaks new ground not only on the Nadelmans and folk art, but also in the history of American art and taste during the fast-paced cultural revolutions of the early twentieth century.

Elizabeth Stillinger is an independent scholar.

Cynthia Nadelman is an independent scholar and writer.

Barbara Haskell is the curator at the Whitney Museum of American Art.

Margaret K. Hofer is curator of Decorative Arts, New-York Historical Society. Roberta J.M. Olson, Ph.D. is professor emerita of Art History at Wheaton College in Massachusetts, and curator of Drawings at the New-York Historical Society. In addition to guest-curating exhibitions for museums in the United States, among them the National Gallery of Art and the Walters Art Museum, she has participated in exhibitions in Italy at the Galleria Nazionale d'Arte Moderna in Rome (1983) and elsewhere, such as the MART, Museo di Arte Moderna e Contemporanea di Trento e Rovereto.
Loading...
or support indie stores by buying on