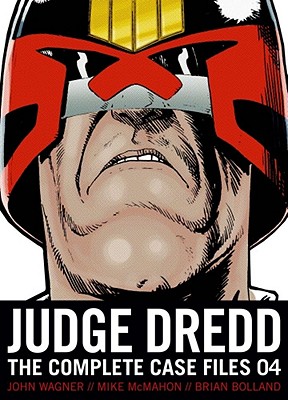 Judge Dredd – the future lawman with the powers of judge, jury and executioner at his disposal – faces some of his most challenging cases yet in this fourth volume of his complete adventures.

In Mega-City One crime doesn't pay!Judge Dredd - the future lawman with the powers of judge, jury and executioner at his disposal - faces some of his most challenging cases yet in this fourth volume of his earliest adventures. From the all-time classic Judge Child saga to the first appearance of legendary perp Chopper in Un-American Graffiti this collection is heaving with thrills and action-packed entertainment!

With over 300 2000 AD stories to his name – not to mention over 250 Daily Star Judge Dredd strips – Alan Grant’s prolific creative record speaks for itself. Outside the Galaxy’s Greatest Comic, Grant is well-known to Batman fans following a lengthy run on various incarnations of the title. More recently he has adapted Robert Louis Stevenson’s classic novels Kidnapped and Doctor Jekyll and Mr Hyde in Graphic Novel format with artist Cam Kennedy.

His characters all spiky lines and outsized boots, Mick McMahon – some times known as Mike – co-created perennial 2000 AD favourites The V.C.s, and provided Tharg with many classic episodes of Judge Dredd, Ro-Busters, A.B.C. Warriors and Sláine. Outside of the Galaxy’s Greatest Comic, he drew an adventure with the original Cybermen for Doctor Who Magazine; Sonic the Hedgehog for Sonic the Comic; and, in America, issues of Batman: Legends of the Dark Knight plus the mini-series Tattered Banners and The Last American, the latter co-created with John Wagner and Alan Grant.

Perhaps the most popular 2000 AD artist of all time, Brian Bolland’s clean-line style and meticulous attention to detail ensure that his artwork on strips including Dan Dare, Future Shocks, Judge Dredd and Walter the Wobot looks as fresh today as it did when first published. Co-creator of both Judge Anderson and The Kleggs, Bolland’s highly detailed style unfortunately precluded him from doing many sequential strips — although he found the time to pencil both Camelot 3000 and Batman: The Killing Joke for DC Comics.

One of 2000 AD’s best-loved and most honoured artists, Ian Gibson is responsible for the co-creation of The Ballad of Halo Jones (with Alan Moore), and created Bella Bagley, an unfortunate character in Judge Dredd’s world who fell head-over-heels in love with ‘Old Stoney Face’ himself! His work outside the Galaxy’s Greatest Comic includes Chronicles of Genghis Grimtoad, Star Wars: Boba Fett, X-Men Unlimited, plus the designs for the TV series Reboot.

Steve Dillon is a fan-favourite 2000 AD writer and artist, and the creator of both Hap Hazzard and the Irish Judge Joyce. His writing for the Galaxy’s Greatest Comic includes Future Shocks and Rogue Trooper, while Dillon’s pencils have graced A.B.C. Warriors, Bad Company, Judge Dredd, Harlem Heroes, Ro-Busters, Rogue Trooper and Tyranny Rex. Dillon shot to international superstardom as a result of his work on DC/Vertigo’s Preacher, co-created with 2000 AD’s Garth Ennis.

Since his Future Shock debut in Prog 37, Brett Ewins has been one of the Galaxy’s Greatest Comic’s most beloved artists. Co-creator of the classic Bad Company, Ewins has also contributed to A.B.C. Warriors, Daily Star Dredd, Judge Anderson, Judge Dredd, Kelly, Mega-City One, Rogue Trooper, Ro-Jaws, Robo-Tales and Universal Soldier. Beyond 2000 AD, Ewins was a co-founding editor of Deadline magazine, and co-pencilled and inked the hugely acclaimed Skreemer series, which he co-created with writer Peter Milligan. He also created Johnny Nemo, which is now enjoying great success in Cyberosia Publishing’s new US edition.
Loading...
or
Not Currently Available for Direct Purchase