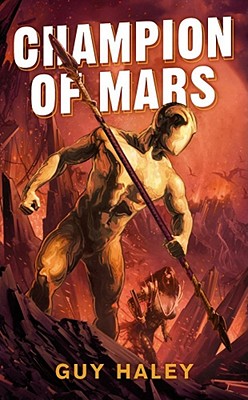 Kim Stanley Robinson meets Edgar Rice Burroughs in this amazing story of the distant future of Mars. In the far future, Mars dies a second time. The Final War between man and the spirits is beginning.

In the far future, Mars dies a second time. The Final War between man and the spirits is beginning.

In a last bid for peace, disgraced champion Yoechakanon Val Mora and his spirit lover Cybele are set free to find the long-missing Librarian of Mars, the only hope to save the remnants of mankind. In the near-future Dr Holland, a scientist running from a painful past, joins the Mars colonisation effort, cataloguing the remnants of Mars' biosphere before it is swept away by the terraformation programme.

When an artefact is discovered deep in the caverns of the red planet, the actions of Holland and his team lead to tragedy, with profound consequences that ripple throughout time, affecting Holland's present, the distant days of Yoechakanon, and the eras that bridge the aeons between.

Guy Haley began his career on SFX Magazine in 1997 before leaving to edit Games Workshop's White Dwarf, then SF magazine Death Ray. Since 2009 he has been a wandering writer, working in both magazines and novels. He lives in Somerset with his wife and son, a malamute and an enormous, evil-tempered Norwegian forest cat called, ironically, Buddy. Graham McNeill has written more than twenty novels for Black Library. His Horus Heresy novel, A Thousand Sons, was a New York Times bestseller and his Time of Legends novel, Empire, won the 2010 David Gemmell Legend Award. Originally hailing from Scotland, Graham now lives and works in Nottingham.
or
Not Currently Available for Direct Purchase
Copyright © 2020 American Booksellers Association