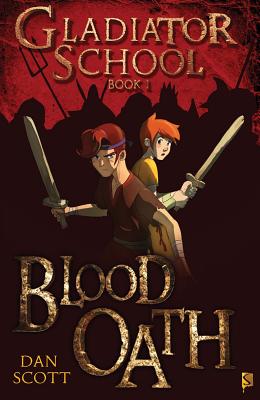 Introducing Gladiator School, a thrilling series set in ancient Rome. Young Lucius's privileged life crumbles when his father Aquila is accused of being a spy and a traitor. Now, Aquila has mysteriously disappeared--and, in order to support their family, Lucius's brother Quintus has taken the dreaded blood oath to become a gladiator. While Quintus risks his life in the arena, Lucius fights for their survival among the slaves and criminals he meets in this new world--and vows to prove his father's innocence. Where has Aquila gone? Why has he abandoned everything he once stood for? And what is the meaning of the coded messages that Lucius has been receiving? Action packed and exciting, Blood Oath will keep kids turning the pages.

Dan Scott was born in Surrey, England. Growing up, he became interested in ancient Rome and his love of historical fiction provided plenty of inspiration for the adventure stories he began to write as a child. Eventually, his characters and stories developed into the action-packed Gladiator School series.
Loading...
or
Not Currently Available for Direct Purchase