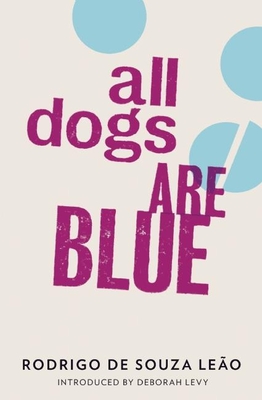 All Dogs Are Blue

"Rodrigo de Souza Le o is an exceptional author and has had a major impact on contemporary Brazilian literature."--Paulo Scott

All Dogs are Blue is a scurrilously funny tale of life in a Rio insane asylum. Its raw style and comic inventiveness signal a major voice in Brazilian literature. Sadly the author died, aged forty-three, soon after it was published in 2008.

Due to his mental fragility, Rodrigo de Souza Le o rarely left his house and yet, through social media, blogging, and e-mail, he became close to many Brazilian writers and poets and remains highly regarded today.

Rodrigo Antonio de Souza Leao Rodrigo de Souza Leao was born in Rio de Janeiro in 1965 and died there in 2008, in a psychiatric clinic, shortly after publishing his extraordinary autobiographical novel All Dogs are Blue. Due to his mental fragility, Souza Leao rarely left his house and yet, through social media, blogging and email, he became close to many Brazilian writers and poets, and remains highly regarded today. His death was marked by a flood of poems in homage.

Souza Leao was a prolific writer, publishing many poetry collections in his lifetime and co-founding Zunai, one of Brazil's most important poetry magazines. Since his death, further works of fiction have been published to widespread acclaim and his 'outsider' art received a dedicated exhibition at Rio's Museum of Modern Art. All Dogs are Blue has been adapted for the stage and will be published in Spanish in Juan Pablo Villalobos's translation.

Publisher Stefan Tobler Stefan Tobler founded And Other Stories in 2010 out of frustration at the great books not being published in English. Born in the Amazon to English and Swiss parents, he translates from Portuguese and German. Recent translations include Agua Viva by Clarice Lispector and the poetry collection Silence River by Antonio Moura.

Translator Zoe Perry Zoe Perry was born in the Southern United States in 1981 to an American father and Canadian mother. A full-time translator since 2010, she also works from French. After spending the last eight years living everywhere from Moscow to Montreal, including four years in Sao Paulo, Brazil, she now calls Madrid home.
Loading...
or
Not Currently Available for Direct Purchase