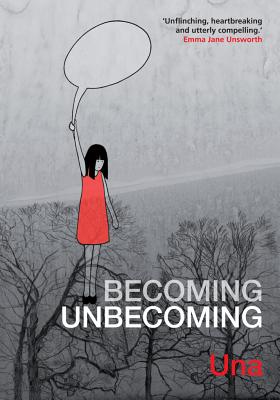 It's 1977 and Una is twelve. A serial murderer is at large in West Yorkshire and the police are struggling to solve the case - despite spending more than two million man-hours hunting the killer and interviewing the man himself no less than nine times. As this national news story unfolds around her, Una finds herself on the receiving end of a series of violent acts for which she feels she is to blame. Through image and text Becoming Unbecoming explores what it means to grow up in a culture where male violence goes unpunished and unquestioned. With the benefit of hindsight Una explores her experience, wonders if anything has really changed and challenges a global culture that demands that the victims of violence pay its cost.

Una is an artist, academic, and comics creator whose work aims to explore lived experience within a socio/historical context. Her self-published graphic narratives have covered disability, psychosis, political activism, and violence against women and girls. "Becoming Unbecoming" is her first graphic novel.
Loading...
or
Not Currently Available for Direct Purchase