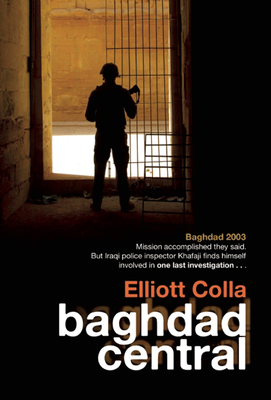 Baghdad Central is a noir debut novel set in Baghdad in September 2003. Now a major TV series on HULU. The WSJ said: 'Baghdad Central," the impossible-to-stop-watching six-part series on Hulu, is a Middle Eastern western in the "High Noon" tradition, though that hardly does it justice. Yes, there's a solitary hero with the cards stacked against him. High-stakes gambling. Even a saloon. But the setting is Baghdad during the Iraq War.The US occupation of Iraq is a swamp of incompetence and self-delusion. The CPA has disbanded the Iraqi army and police as a consequence of its paranoid policy of de-Ba'athification of Iraqi society. Tales of hubris and reality-denial abound, culminating in Washington hailing the mess a glorious "mission accomplished."

Inspector Muhsin al-Khafaji is a mid-level Iraqi cop who deserted his post back in April. Khafaji has lived long enough in pre- and post-Saddam Iraq to know that clinging on to anything but poetry and his daughter, Mrouj, is asking for trouble. Nabbed by the Americans and imprisoned in Abu Ghraib, Khafaji is offered one way out--work for the CPA to rebuild the Iraqi Police Services. But it's only after United States forces take Mrouj that he figures out a way to make his collaboration palatable, and even rewarding. Soon, he is investigating the disappearance of young women translators working for the US Army. The bloody trail leads Khafaji through battles, bars, and brothels then finally back to the Green Zone, where it all began.

This is a first novel by Elliott Colla, an American writer totally immersed in Middle Eastern affairs. He is a professor of Arabic literature at Georgetown University, and a well-known translator from the Arabic of local fiction and poetry. He divides his time between Washington, DC, and the Middle East.

Elliott Colla, 47, lives between Washington DC and the Middle East. This is his first novel. He teaches Arabic literature at Georgetown University. He has translated much contemporary Arabic literature, including: Ibrahim Aslan's novel, The Heron, Idris Ali's Poor, Ibrahim al-Koni's Gold Dust, and Rabai al-Madhoun's The Lady from Tel Aviv. He is also a co-editor of the e-zine, Jadaliyya.
or support indie stores by buying on
Copyright © 2020 American Booksellers Association