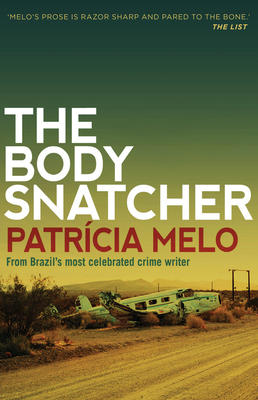 Praise for The Body Snatcher:

An excellent and atypical book, a fantastic adventure.--The Huffington Post

An explosive mixture of dread, greed and corruption. You won't put it down until you've read the very last page.--Cosmopolitan

This tightly plotted novel by Brazil's best-selling crime author is a tale of drug dealing gone wrong, police corruption, and macabre blackmail, set in a heat-soaked town in the vast untamed Brazilian lowlands bordering Bolivia. One bright Sunday, alone on the banks of the Paraguay River, the narrator witnesses the fatal crash of a small plane. He finds a kilo of cocaine in the dead pilot's backpack and pockets it along with the pilot's expensive watch. Thus begins the protagonist's long slide into corruption.

When police locate the crash site, the pilot's body is missing and a large-scale search ensues. Our hero, now involved in a busted cocaine deal, ends up owing a Bolivian drug gang so much money that blackmailing the wealthy family of the dead pilot seems to be the only way out. When the family secretly agrees to pay serious money to recover the body of their son, our hero, who does not have the pilot's body, decides someone else's will do. . . . Or so he thinks.

Patricia Melo is an author and playwright born in Sao Paolo (1962). Her novels Lost World, The Killer, In Praise of Lies, and Inferno have been published in English to rave reviews. Her works have also been translated into Italian, Spanish, and Dutch.