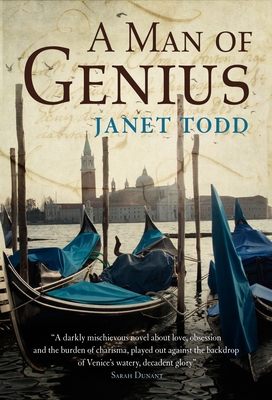 A Man of Genius

"Strange and haunting, a gothic novel with a modern consciousness." Philippa Gregory A quirky, darkly mischievous novel about love, obsession and the burden of charisma, played out against the backdrop of Venice's watery, decadent glory. Sarah Dunant 'A mesmerizing story of love and obsession in nineteenth century Venice: dark and utterly compelling.
Natasha Solomons Intriguing and entertaining; a clever, beguiling debut.Todd knows her Venice backwards.
Salley Vickers "Revealing, surprising, compelling, gripping." Miriam Margolyes, actress A Man of Genius portrays a psychological journey from safety into obsession and secrecy. It mirrors a physical passage from flamboyant Regency England through a Europe conquered by Napoleon. Ann, a successful writer of cheap Gothic novels, becomes obsessed with Robert James, regarded by many, including himself, as a genius, with his ideas, his talk, and his band of male followers. However, their relationship becomes tortuous, as Robert descends into violence and madness.

The pair leaves London for occupied Venice, where Ann tries to cope with the monstrous ego of her lover. Forced to flee with a stranger, she delves into her past, to be jolted by a series of revelations--about her lover, her parentage, the stranger, and herself.

Janet Todd is known for her works about Mary Wollstonecraft, Aphra Behn, the Shelley circle, and Jane Austen. Born in Wales, her wandering childhood in the United Kingdom, Bermuda, and Sri Lanka led to work as an academic in Ghana, the United States, and United Kingdom. Her passion has been for women writers, the largely unknown and the famous. A former president of Lucy Cavendish College, University of Cambridge, she lives in Cambridge and Venice.

Janet Todd was born in Wales and had a wandering childhood in England, Scotland, Bermuda and Ceylon. She worked as an academic in Ghana, Puerto Rico, the US (University of Florida and Professor at Rutgers, NJ), Scotland and England. An Emerita Professor at the University of Aberdeen, until recently she was President of Lucy Cavendish College, Cambridge. An internationally renowned scholar, she is an expert on Jane Austen, Mary Wollstonecraft and Aphra Behn. Her passion has been for women writers, both the largely unknown and the famous.
Loading...
or support indie stores by buying on