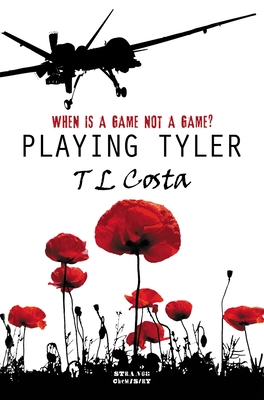 When is a game not a game?

Tyler MacCandless can’t focus, even when he takes his medication. He can’t focus on school, on his future, on a book, on much of anything other than taking care of his older brother, Brandon, who’s in rehab for heroin abuse… again.

Tyler’s dad is dead and his mom has mentally checked out. The only person he can really count on is his Civilian Air Patrol Mentor, Rick. The one thing in life it seems he doesn’t suck at is playing video games and, well, thats probably not going to get him into college.

Just when it seems like his future is on a collision course with a life sentence at McDonald’s, Rick asks him to test a video game. If his score’s high enough, it could earn him a place in flight school and win him the future he was certain that he could never have. And when he falls in love with the game’s designer, the legendary gamer Ani, Tyler thinks his life might finally be turning around.

That is, until Brandon goes MIA from rehab and Tyler and Ani discover that the game is more than it seems. Now Tyler will have to figure out what’s really going on in time to save his brother… and prevent his own future from going down in flames.

T. L. Costa is a graduate of Bryn Mawr College and has a Masters of Teaching from Quinnipiac University who taught high school for five years before becoming a full-time mom and writer.

She has lived in Texas, New York, New Jersey and Spain. Currently, she lives in Connecticut with her husband and two children.

T. L. can be found online @TLCosta1 on Twitter.

"Fresh. Thrilling. Heartfelt. I'm running out of adjectives, but trust me. You will love this book."
- Kristan Higgins, NYT and USA TODAY Bestseller author of THE BEST MAN

"T L Costa brings the intrigue of Tom Clancy, technical wizardry of Dan Brown, and the heartthrob of Stephanie Meyer to life in a voice that is entirely her own, one that speaks for the new generation of teenage survivors."
- Christopher S. Nelson