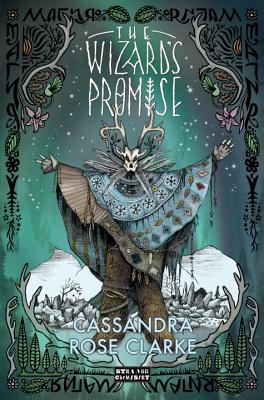 Hanna has spent her life hearing about the adventures of her namesake Ananna, the lady pirate, and assassin Naji. She dreams of the same adventures, but little does she know she is about to tumble into one of her own. Hanna is apprenticed to a taciturn fisherman called Kolur, and, during a day of storms and darkness, are swept wildly off course.
In this strange new land, Kolur hires a stranger to join the crew and, rather than heading home, sets a course for the dangerous island of Jadanvar. As Hanna meets a secretive merboy, and learns that Kolur has a deadly past, she soon realises that wishing for adventures is a dangerous game - because those wishes might come true.


Praise For The Wizard's Promise…

“An inventive debut with a strong narrative voice, a glimpse of an intriguing new world.” – Adrian Tchaikovsky, author of the Shadows of the Apt series

“Ananna of Tanarau is a delightfully irascible heroine, inhabiting a fascinating and fresh new world that I would love to spend more time in. Pirate ships? Camels? Shadow dwelling assassins? Yes please! Can I have some more?”
– Celine Kiernan, author of the Moorhawke trilogy

“A story that will draw you in with its rich setting filled with assassins, pirates, magic, and two lead characters that you can't help but root for. A highly recommended read! (35/35)” – Fantasy’s Ink

“The Assassin’s Curse […] gave me a fantastical story of epic levels, with grand fantasy that seems bigger than the story itself and characters that I’m ever-rooting for, and I’m ridiculously impressed! A definite favorite of the year!” – Paranormal Indulgence

“It’s an exhilarating tale filled with sword fights, magic, suspense, and subtle romance. I devoured it in one sitting!” - http://amysbookden.blogspot.co.uk/2012/09/early-review-assassins-curse-by.html

“It was just as fun as a book about a Pirate Princess reluctantly attached to a Magical Assassin could possibly be.” - http://brandy-painter.livejournal.com/90652.html

“With an instantly compelling plot, loveable characters, and a completely engaging romance, The Assassin's Curse by Cassandra Rose Clarke is one of the most engrossing books I've read this year.” - http://recoveringpotteraddict.blogspot.co.uk/2012/09/review-assassins-curse-assassins-curse.html

"An exciting and original YA novel with magic, pirates, myth and adventure, The Assassin's Curse will hook you in and keep you tugging on the line for the next book in Clarke's series."
- Serena Chase, USA Today

"Think Aladdin mixed with say, Tamora Pierce's Alanna series, plus a little Pirates of the Caribbean for good measure, and you'll have an idea of the flavour of this story.  I know you're already thinking it, Fun with a capitol F, and you're right, it is."
-Rhiannon, The Diary of a Bookworm

Cassandra Rose Clarke is a speculative fiction writer and occasional teacher living amongst the beige stucco and overgrown pecan trees of Houston, Texas. She is a graduate of the 2010 Clarion West Writers Workshop, and she holds a master's degree in creative writing from the The University of Texas at Austin. Her short fiction has appeared in Strange Horizons.
Loading...
or
Not Currently Available for Direct Purchase