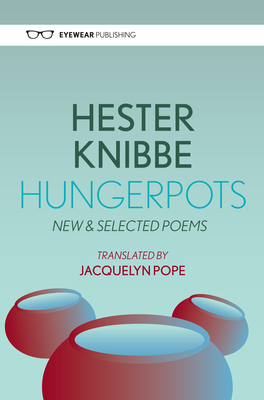 Poetry. Translated from the Dutch by Jacquelyn Pope. The first major collection of Hester Knibbe's work to be published in English, HUNGERPOTS brings together a selection of poems displaying the range and skill of one of the most important Dutch poets writing today. Heralded by critics and the recipient of major European literary awards, Knibbe, in language that is both straightforward and subversive, casts and recasts themes of life, loss, and longing. The work in this selection traces the career of a poet now in full flight and at the apogee of her career.

This book is a real pleasure. Knibbe's voice can be harrowingly clear and dreamily disorienting, often in the same poem--but it's a fortifying and ennobling one nonetheless. Jacquelyn Pope has certainly come up witha memorable and sonically autonomous voice. I read the book with a sense of genuine excitement and discovery and will certainly return to it.--Christian Wiman

Jacquelyn Pope's translations, musical like her own poems, are faithful, eloquent and unafraid to bring something utterly strange and new across into our tradition in English.--Ilya Kaminsky

Hester Knibbe resurrects the dead, the 'Then'. Simultaneously austere and elaborate, her poems investigate contradiction and ambiguity: the 'flexibility of stone', the Persephone who is complicit in her own kidnapping, the fluidity between dream life and the waking world. Jacquelyn Pope's acute translations capture Knibbe's agile line breaks and syntactical ruses, and do justice to her singular and unnerving imagination.--Kathryn Maris

A revelatory new voice in a translation bursting with life.--Susan Bernofsky.

Hester Knibbe is one of the most acclaimed contemporary poets in The Netherlands. The author of fifteen collections of poems and the recipient of numerous national awards, her most recent books include Oogsteen, selected poems published in 2009 and Archa ĩsch de dieren (2014). Jacquelyn Pope is the author of WATERMARK (Marsh Hawk Press, 2005). Her poems and translations have been published widely in the US and UK. She is the recipient of a 2015 Nea Translation Fellowship, a Pen/Heim Translation Fund grant, and awards from the Academy of American Poets and the Massachusetts Cultural Council.
Loading...
or
Not Currently Available for Direct Purchase