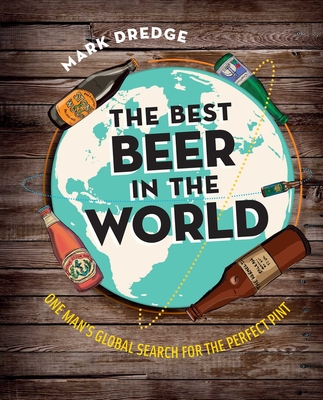 The Best Beer in the World

One man's global search for the perfect pint

Join award-winning beer writer Mark Dredge as he goes on a quest for the perfect pint.

What’s the best beer you’ve ever tasted? What’s your favorite beer? Where can I drink your ultimate brew? These are questions that beer writer Mark Dredge is always being asked. And he doesn’t have an answer… yet. This is his search for the world’s best beer. Part city guide, part travelogue, and part reference book, The Best Beer in the World takes you on a journey through North and South America, Europe, Asia, and further afield in search of the essential bars and breweries, immersing you in the history and beer culture of each region and highlighting the key beers to try. Alongside this are the quintessential beer experiences from all four corners of the globe—whether that’s searching for the best IPAs California has to offer, celebrating Oktoberfest in Brazil, downing fresh Bia Hoi on a scorching day in Hanoi, or heading to Prague to drink unfiltered pilsner from the world’s first lager brewery. So if you want to read interviews from London’s best new craft brewers, see illustrated maps of the finest watering holes in Melbourne, understand the science of taste, unlock the secrets of beer nirvana in Portland, find out where the world’s biggest beer festivals are, or simply where to go for a perfect pint of Guinness in Dublin, all is explained here, along with the all-important answer to the question: what is The Best Beer in the World?

Mark Dredge is an award-winning beer, food, and travel writer from London, England. In 2011, 2013, and 2014, he was awarded Beer and Food Writer of the Year from the British Guild of Beer Writers for the work on his blog Pencil and Spoon and then his first two books, Craft Beer World and Beer and Food, which also won an award from the North American Guild of Beer Writers. Mark has also written The Best Beer in the World, Cooking with Beer, and The Beer Bucket List for Dog 'n' Bone, and his writing has featured in leading publications across the globe; he’s also an international beer judge. You can follow him on Twitter and Instagram: @MarkDredge.
Loading...
or
Not Currently Available for Direct Purchase