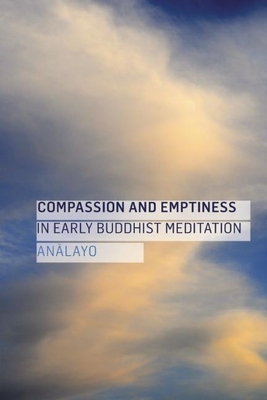 This book is the result of rigorous textual scholarship that can be valued not only by the academic community, but also by Buddhist practitioners. This book serves as an important bridge between those who wish to learn about Buddhist thought and practice and those who wish to learn from it. . . . As a monk engaging himself in Buddhist meditation as well as a professor applying a historical-critical methodology, Bhikkhu Analayo' is well positioned to bridge these two communities. . . . Exploring the meditative practices of compassion and emptiness, Analayo' casts fresh light on their earliest sources in the Buddhist tradition.--17th Karmapa Ogyen Trinley Dorje

Arising from the author's long-term, dedicated practice and study, this book provides a window into the depth and beauty of the Buddha's liberating teachings. Serious meditation students will benefit tremendously from the clarity of understanding that Venerable Analayo's efforts have achieved.--Sharon Salzberg

In this study, Venerable Analayo' brings a meticulous textual analysis of Pali texts, the Chinese Agamas and related material from Sanskrit and Tibetan to the foundational topics of compassion and emptiness. While his analysis is grounded in a scholarly approach, he has written this study as a helpful guide for meditation practice.--Jetsunma Tenzin Palmo

Bhikkhu Analayo' completed a PhD on the Satipatthanasutta at the University of Peradeniya, Sri Lanka, in 2000, published in 2003 by Windhorse Publications under the title Satipatthana: The Direct Path to Realization. At present Analayo' is a professor of Buddhist studies at the Sri Lanka International Academy in Pallekele.

Bhikkhu Analayo completed a PhD on the Satipatthanasutta at the University of Peradeniya, Sri Lanka in 2000, published in 2003 by Windhorse Publications under the title Satipatthana: The Direct Path to Realization. He has also written a habilitation research through a comparative study of the Majjhimanikaya in the light of its Chinese, Sanskrit, and Tibetan parallels at the University of Marburg in 2007, published 2011. He published Perspectives on Satipatthana in 2014, by Windhorse Publications. At present Analayo is a professor of Buddhist Studies at the Sri Lanka International Academy in Pallekele. He teaches at the Center for Buddhist Studies of the University of Hamburg and researches at the Dharma Drum Buddhist College in Taiwan. His main research area is early Buddhism and in particular the topics Chinese Agamas, Meditation, and Women in Buddhism. Besides his academic pursuits, he spends about half of his time in meditation under retreat conditions and regularly teaches meditation courses in Asia and the West.
Loading...
or support indie stores by buying on