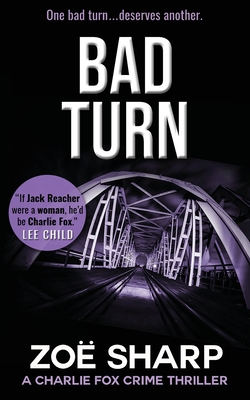 "If Jack Reacher were a woman, he'd be Charlie Fox." Lee Child

Charlie Fox has quit her job in close protection, been turned out of her apartment, and is apparently out of luck.

House-sitting in rural New Jersey has to be the pits-TV and TV dinners. A far cry from Iraq... Bulgaria... Afghanistan. Unlucky or not, she happens to be around at the right time to foil a violent kidnap attempt on Helena, wife of billionaire arms dealer, Eric Kincaid.

Kincaid offers her a job looking after Helena. The rumours about Kincaid's business empire say he's gone over to the dark side, but Charlie is in no position to be fussy. And protecting people against those who want to do them harm is what she's good at. But when the threats against the Kincaids escalate, and then follow the couple over to Europe, Charlie's really going to have to up her game. It's time to take the fight to the enemy.

Charlie's at her best putting an end to trouble. Now she must learn to strike first. And hope that the Kincaids don't discover the secret she's been keeping from them, right from the start.

If you like Lee Child but have been looking for strong yet believable female protagonists, who will take down the bad guys without hesitation but who are still human enough to care, then bodyguard Charlie Fox is definitely for you. Readers have found books in this series action-packed thrill rides that kept them glued to the end, well-written, gritty, and hard to put down. A gripping page-turner.

BAD TURN is #13 in the Charlie Fox series. Although I've tried hard to make each of the stories stand alone, inevitably Charlie's history builds up over the course of the novels. If you are new to the series and want to know the full story of Charlie-how she began working with Sean Meyer after their time in the Army-then start at the beginning. If you're more interested in Charlie's career as a close-protection operative, then I'd recommend you begin with Book #4, FIRST DROP, when she and her teenage charge find themselves on the run during her first bodyguard job in Florida.