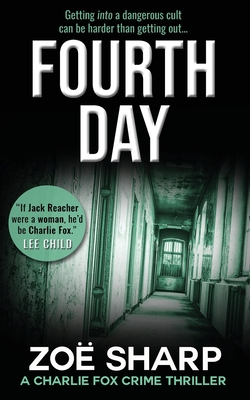 "Can you suggest one salient reason why I shouldn't follow my first instincts and rid myself of you at the earliest opportunity?"

The cult known as Fourth Day is well-funded and guards its privacy. Five years ago, Thomas Witney went in to gather evidence that the cult's charismatic leader, Randall Bane, was responsible for the death of Witney's son. Witney never came out.

Now, ex-Special Forces soldier turned bodyguard, Charlie Fox, agrees to go undercover into Fourth Day's California stronghold. A fast covert op-no real danger for someone with her mind-set and training. But Charlie is not prepared for the lure of Randall Bane, nor how easily he will pinpoint her weaknesses...

If you like Lee Child but have been looking for strong yet believable female protagonists, who will take down the bad guys without hesitation but who are still human enough to care, then bodyguard Charlie Fox is definitely for you. Readers have found books in this series action-packed thrill rides that kept them glued to the end, well-written, gritty, and hard to put down. A real page-turner.

This is Book #8 in the Charlie Fox series. Although I've tried hard to make each of the stories stand alone, inevitably Charlie's history builds up over the course of the novels. If you are new to the series and want to know the full story of Charlie-how she began working with Sean Meyer after their time in the Army-then start at the beginning. If you're more interested in Charlie's career as a close-protection operative, then I'd recommend you begin with Book #4, FIRST DROP, when she and her teenage charge find themselves on the run during her first bodyguard job in Florida.