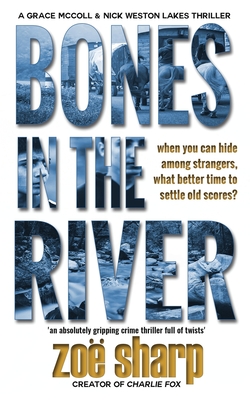 Bones in the River

Driving on a country road late at night,
you hit a child.
There are no witnesses.
You have EVERYTHING to lose.
What do you do?

The traditional Appleby Horse Fair hosts the largest gathering of Gypsies and Travellers in Europe.
The sudden influx of more than 40,000 visitors into the small Lakeland town has always caused its share of problems, with strained relations between off-comers and locals.
But it's also known as a good time to settle old scores.
This year, the Fair brings with it with the discovery of two bodies near the River Eden-one very recent and another a long time buried.
As CSI Grace McColl and Detective Nick Weston search for answers, old secrets are revealed, old wounds are reopened, and tensions threaten to erupt into violence.
While someone much closer to home is trying to get away with murder...

The follow-up to DANCING ON THE GRAVE, the first of the Lakes Thriller Trilogy, this is a self-contained story featuring:
CSI Grace McColl. She is forty, amicably divorced from her husband, Max. Born in the Lakes, she was always a keen photographer, who trained as a crime scene investigator after her photographs were used to help a guilty man go free and he later caused a woman's death. Grace still feels she has much to make amends for. She hides her emotions behind a calm fa ade that can make her sometimes appear cold. She lives in Orton village, with a Weimaraner called Tallie.

Detective Constable Nick Weston. He is thirty-two, living with his partner, Lisa, a hairdresser, with whom he has a volatile relationship, and a young daughter, Sophie. Nick worked in Firearms in Manchester and then undercover for the Met in London. After he was compromised and almost beaten to death on an undercover op, Lisa persuaded him to transfer up to her native Cumbria, where he is considered an outsider among his colleagues. Nick is still coping with some of the mental and physical after-effects of his experiences.

READER REVIEWS:
"Unique characters and superb writing... I highly recommend."
"Another book from Zo Sharp with strong female protagonists that is hard to put down."
"I love all of Ms Sharp's writing and while Charlie Fox will always be my favourite, the more I read of this pair the more I like them."
"Zo Sharp has shown what a versatile writer she is by changing from her blockbuster Charlie Fox series (which you should read if you haven't) to these books about a CSI."
"Grace McColl is an endearing, smart and fascinating lead character as well and I look forward to the projected third novel in this trilogy. Grab this one as soon as it comes out-and if you haven't read DANCING ON THE GRAVE, grab that one too."
"As rich and fascinating as I expected with the added plus of the engaging new (to me) characters of CSI Grace McColl and Detective Nick (Weston). They're intriguing alone and compelling together."
"Sharp can be counted upon for providing admirable female characters against the backdrops of casual misogyny and domestic abuse and doing so with a light touch."
"I love the Charlie Fox series by Zo Sharp, and didn't think this novel could be as good as those, but now that I have read BONES IN THE RIVER, I actually like it even better "
"Thoroughly enjoyed the book. I could not put it down. Zo Sharp never disappoints."
"I was instantly hooked."
"It's a cracking story, by a gifted author and I can't wait for more from either series. Highly recommended."