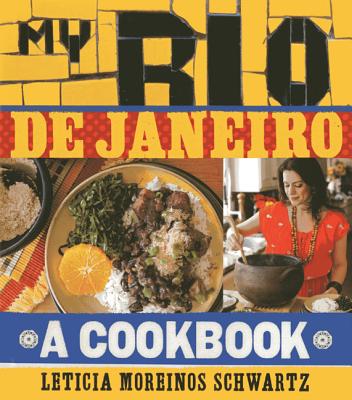 Teacher and cookbook author Leticia Moreinos Schwartz is the author of The Brazilian Kitchen, which won the 2010 Gourmand World Cookbook Awards in Paris for Best Latin Cookbook. She has made numerous TV and radio appearances including The Today Show, Martha Stewart Living Radio Program, Better Homes and Gardens Better TV, and NBC's LX TV. She is a regular guest chef on WTNH-TV, and her work has been featured in many web and print media outlets such as The New York Times, Saveur, Fine Cooking Magazine, and CT Cottages and Gardens. To see her appearances, go to www.chefleticia.com. Her articles have been featured on popular web sites such as TheDailyMeal.com and CTbites.com. Her essay It all Ends in Samba is part of a book project called Creating a Meal You'll Love, featuring other acclaimed chefs and food writers such as Mimi Sheraton, Nick Malgieri, and Marcus Samuelsson. A student of her craft, Leticia often attends culinary conferences, workshops, and seminars, including Food Journalism with Alan Richman and Food Blogging with Steven Shaw, both at the French Culinary Institute. She is a proud and active member of IACP and NYWCA.
Loading...
or
Not Currently Available for Direct Purchase