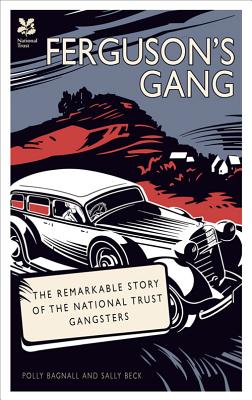 The Ferguson Gang was a mysterious and deeply eccentric group of women in the 1930s who combined anarchic stunts, fine dining, and saving the English countryside. Disturbed by the growing destruction of landscape and historic buildings in the UK, they started to raise money for the National Trust, which a masked member would deliver in bizarre ways Victorian coins sewn into a goose's carcass, 100 pound notes wrapped around cigars, and checks stuffed into miniature bottles. In between stunts they traveled the country finding new places under threat, fueled by hampers from Fortnums. Their escapades were followed closely in the national press. When one of the gang broadcast a radio appeal on behalf of the NT, they netted 600 new members and a huge sum of money. They helped to save many properties, tracts of the Cornish coast, and supported appeals to buy land in the Lake District, Devon, and Wiltshire. The operated with masks and pseudonyms (including "Bill Stickers," "Red Biddy," "Erb the Smasher," and "The Artichoke"). They maintained their anonymity until death, but this fascinating biography will unmask them all for the first time.

Polly Bagnall is a contemporary British painter and artist. Sally Beck is a national newspaper and magazine journalist.
Loading...
or
Not Currently Available for Direct Purchase