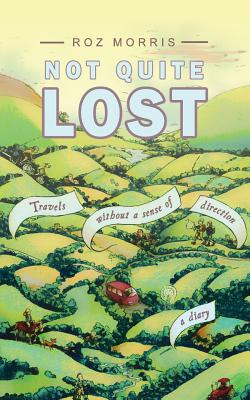 Travels Without A Sense of Direction

In life there's the fast lane, and then there's the scenic route. Take your time getting there and you might meet people whose stories are as gripping as those of any famous name.

In Not Quite Lost, Roz Morris celebrates the hidden dramas in the apparently ordinary. Her childhood home, with a giant star-gazing telescope on the horizon and a garden path that disappears under next door's house. A tour guide in Glastonbury who is having a real-life romance with a character from Arthurian legend. A unit on a suburban business park where people are preparing to deep-freeze each other when they die.

But even low-key travel has its hazards, and Roz nearly runs down several gentlemen from Porlock when her brakes give up on her. She takes her marriage vows in a language she doesn't speak, has a Strictly-style adventure when she stumbles into a job as a flashmob dancer, and hears an unexpected message in an experiment in ESP.

Wry, romantic, amused and wonder-struck, Not Quite Lost is an ode to the quiet places you never realised might tell you a tale.