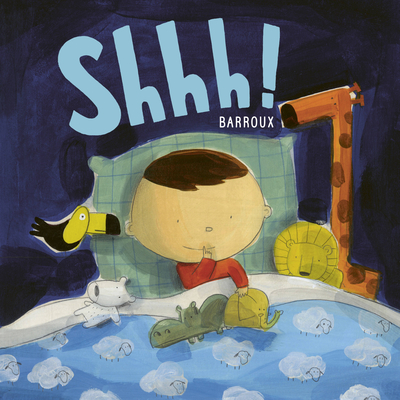 Night falls…It is late. Close your eyes. Time to sleep. This wonderful bedtime story from the masterful illustrator Barroux takes you on a journey through a child’s imagination to a series of dreamy landscapes where animals ready themselves for sleep. The simple, lyrical text and charming illustrations will gently lull even the most reluctant sleeper, providing a calming way for parents to say goodnight.

Listen to the world gently slowing down, then stopping. A whimsical moon character tiptoes to the sky. Shhh! A boy imagines his stuffed animals winding down for bedtime, one by one. Visit a dozing polar bear on an ice floe; a lion in pajamas brushing his teeth; tired giraffes resting their sleepy heads on clouds; a whale singing a soft, beautiful song; a whispering elephant; a yawning hippo; a toucan counting sheep; and finally, the sheep themselves, who are waiting for the end of the story. Time to sleep now. It is late.

With gently humorous text and enchanting imagery that will soothe both little ones and their adults, this bedtime story will quickly become a family favorite.

Born in Paris, Barroux spent much of his childhood in North Africa. He later attended art school in France, worked as an art director, and then moved to New York and Montréal, and has since worked in children’s illustration and press cartoons. He has been published in The New York Times, The Washington Post, and Forbes Magazine and is now well known for his children’s book illustrations.